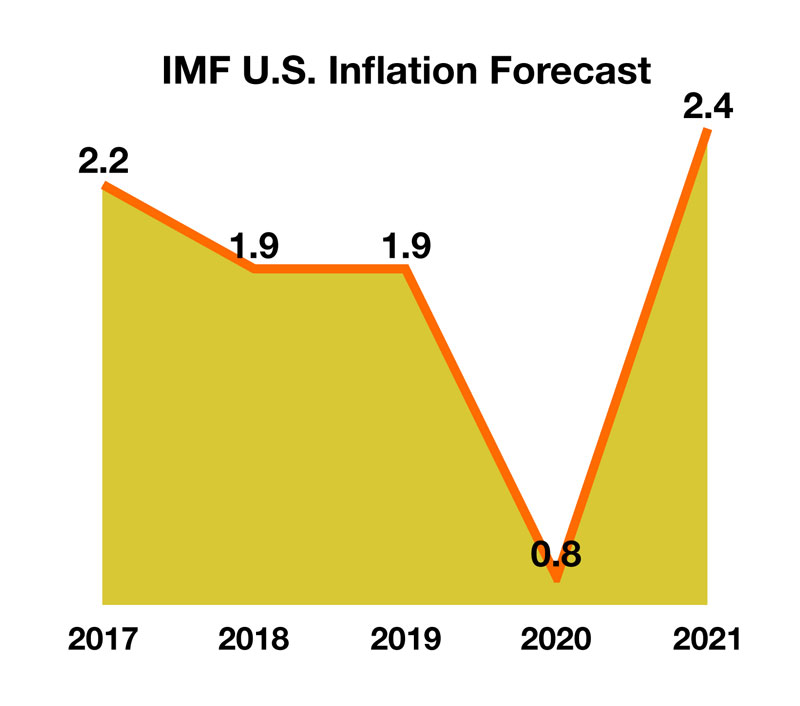 The past 30 years brought upon the onset of globalization, maximizing comparative advantage of countries globally by allowing the production and export of inexpensive products. China’s inclusion into the WTO in 2001 has since allowed the country to manufacture and export products around the world in mass quantities. Globalization is now in danger of retracting, as trade fears among countries has heightened due to the extensive exposure of the virus worldwide.

Higher food prices are imminent, as the FDA reported that the recent closures of several large meat plants will not necessarily lead to shortages, but may result in fewer options for less expensive products. The International Monetary Fund (IMF) estimates inflation for countries worldwide based on various factors. The IMF projects that inflation in the United States will increase through the remainder of the year and again in 2021 to 2.4%.

There are currently two macro economic occurrences that signal a probable rise in inflation. The first is the rapid increase in the U.S. Money Supply, also known as M2, which includes all cash components in the economy such as money market funds, checking deposits, and actual cash. Historically, an increase in the M2 has led to inflationary pressures in some instances. The second occurrence is the potential unwinding of globalization with a renewed focus on domestic production. Heightened tensions between the United States and China have created the notion that a decrease in low-cost Chinese made imports may materialize.