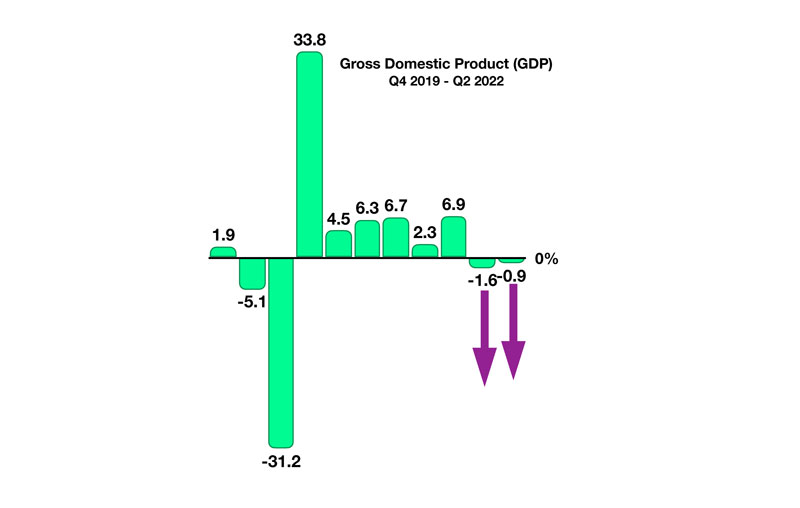 Recession concerns are rising as company earnings, employment data, and economic growth estimates continue to demonstrate an expected slowdown in the economy. Second quarter Gross Domestic Product (GDP) released in July showed a -0.9% decrease in GDP, following a -1.4% decline in the first quarter of the year. Traditional economic credence views two consecutive quarters of negative GDP as constituting a recession.

Markets were anxious in July as company earnings revealed uncertainty surrounding inflation and true economic conditions. Higher operating expenses hindered profit margins for many companies, yet allowed other companies to maintain margins as they continued to pass along elevated costs to consumers in the form of higher prices.

Inflation data showed that overall prices rose 9.1% in the past year, the fastest rise since 1981. Economists believe that the data is being muddled by record-level gasoline and food prices. With fuel prices having eased somewhat in July, upcoming inflation numbers may start to signal a pullback in inflationary pressures as we approach the fall.

The European Central Bank (ECB), the equivalent of the Federal Reserve, increased rates in July in order to help stifle rising inflationary pressures throughout Europe. Consumers in Europe are experiencing little if no respite from rapidly rising prices due to the Russian invasion of Ukraine.

The euro reached parity with the U.S. dollar in July for the first time in twenty years. The equal valuation of the two currencies has made it less costly for Americans buying European products and for those traveling to Europe.

The Federal Reserve imposed its second 0.75% rate increase this year, which acts as a tool for the Fed to combat inflation. Analysts have a growing consensus that the Fed may eventually pause or even reduce rates should the economy start to falter.