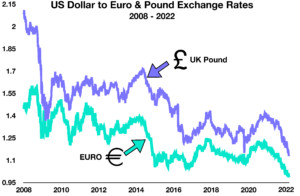 The European economy is currently experiencing turbulence due to the Ukrainian conflict and Russian supply cuts. On the other hand, high-interest rates have increased the strength of the U.S. dollar, resulting in historical lows in the exchange rates of the U.S. Dollar to European currencies.

2022 marked the first time the U.S. Dollar hit parity, or equal value, with the Euro since 2002. The Euro’s peak value was in April of 2008 when one euro was equal to 1.6 dollars. However, the aforementioned economic turbulence in Europe has kickstarted a recent decline in the euro’s valuation, which sits at around one euro equal to 0.97 dollars.

A more drastic decline can be seen in the dollar and the British pound exchange rate. The pound saw a peak of around 2.1 dollars equal to one pound in November 2007, yet has lost nearly half its value in the approximately 14 years since. Currently, the pound is equal to 1.09 dollars, nearly a 50% decline from this peak to the current valuation.

These exchange rates not only highlight the turbulence in European economies but also the growing strength of the U.S. Dollar. The dollar has historically grown stronger in times of global recession and war, which is currently the case as well. Many European goods are much relatively cheaper now for Americans, which could remain for months or even years.